To write a new article, just enter the article title in the box below.

Not sure where to start?

Gasopedia – the Bristol Rovers wiki is constantly being updated and having new articles added. Below is a selection of some of the most recently added pages.

For more, see the full list of new pages. A feed of new additions is also available on Twitter, at http://twitter.com/Gasopedia

Only one Bristol Rovers player has ever represented England while on the books at the club: Geoff Bradford, who won a single cap in 1955, scoring in a 5–1 victory over Denmark. Twenty-one other Rovers players have been capped by England either before they joined the club or after they left it. The record for the most England appearances by a Bristol Rovers player is held by Alan Ball with 72 caps, followed by Mick Channon with 46.

There have been 189 full international matches where the England side included a player who spent part of his career with Bristol Rovers, and the highest number of Rovers players who have been in a single England side is 3. This has happened four times, all of which were in the 1970s 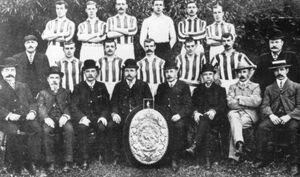 The 1904-05 Southern League championship-winning side.

Community content is available under CC-BY-SA unless otherwise noted.
Advertisement